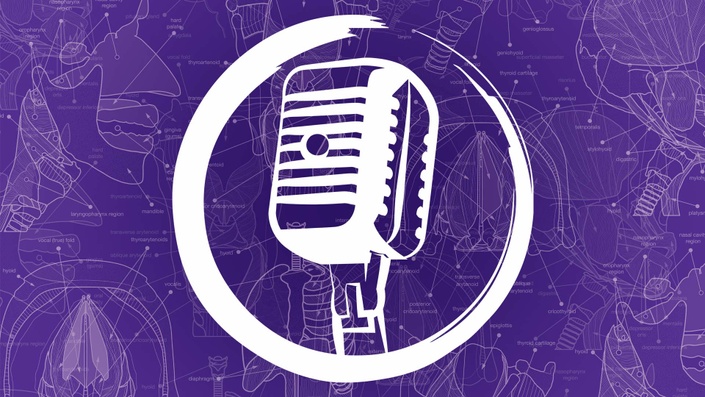 Transform your voice from the comfort of your own home! The Vocal Gym is a fully comprehensive and interactive singing program, utilizing the Throga Technique and the 7 Dimensions of Singing. This is the only patented vocal technique in history, making Throga’s scientific approach truly revolutionary. And unlike traditional lessons, this course allows you to advance at your own pace and re-watch lessons, as often as you like, on any device.

Throga's founder, Richard Fink IV, will guide you throughout the course lectures and exercises. He will break down the complexity of your instrument, help you to diagnose your voice, and provide customizable solutions that target YOUR needs as a singer and performer. Once you start the course, it won’t take long for you to experience a heightened sense of awareness as a singer and release psychological barriers and hidden tensions that may be holding you back.

You Will Learn How To

Is Throga Right For You?

The Vocal Gym is designed for all skill levels and styles of singing. Multi-platinum selling artists and Broadway stars use Throga to overcome vocal disorders, prepare for studio recordings and grueling tour schedules, enabling them to continue progressing throughout their career. Hobbyists use this method to reveal their potential, minimize fatigue, and refine their skills to create captivating and memorable performances. Beginners explore and coordinate their voice for the first time in new and exciting ways, building confidence and discovering the joy in expressing their one-of-a-kind instrument!

Richard Fink IV is the creator of The Throga Technique, #1 Best-Selling Author in vocal education and labeled as the “world’s leading online vocal coach” by the Wall Street Journal. Richard has worked with clients in over 100 countries, spanning all 7 continents, and has taught his techniques to multi-platinum selling artists, actors, political leaders, Broadway stars and singers featured on Disney, Nickelodeon, The Voice, America’s Got Talent, Australia’s Got Talent, The X Factor, American Idol, MTV, CMT, The Ellen DeGeneres Show, The Tonight Show, Live with Kelly, Yo Soy El Artista, and many others.

As a vocalist, Richard is a 3x Guinness World Record holder and award-winning singer for solo performances as Jesus (Jesus Christ Superstar) and Jean Valjean (Les Miserables). He released multiple albums as a songwriter and vocal-producer between 1991 and 2005, which led to co-writing and demoing songs for top charting artists such as Josh Groban and Michael Jackson.

Other career highlights as a vocal coach include adjudicating the 2016-2017 Voice of Dance Life Unite in Australia and Suncane Skale televised throughout Europe, coaching at Talent Camp at Universal Studios, and teaching Masterclasses at various Universities in the USA and Australia. Richard’s crowning achievement, however, was becoming the first and only person in U.S. history to be awarded a full-utility patent on a vocal training technique with the 7 Dimensions of Singing, which is currently being integrated into several high school and university curriculums. 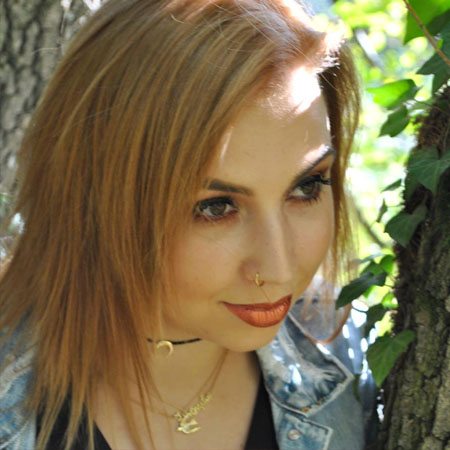 "WOW!! Really amazing course!!! It feels like I have a complete new understanding of my voice and a place (the vocal gym) to transform it!!! This course is absolutely GREAT and one of the best things is that it feels like REAL one-on-one sessions with the master and founder of Throga!!! So many great tools in the course like quizzes, assignments and customized exercises to prove and develop your voice! It also offers many different exercises which is an absolute blessing to focus on your own needs!" 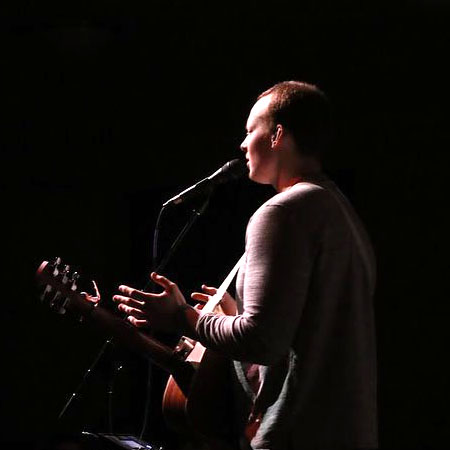 "I love the feel and content of the Vocal Gym! Richard's teaching style translates so well to an online platform, with the same atmosphere of person-ability, grace, and excellence you'd expect from a private in-person lesson. And the exercise lab at the end of this course is KEY for people that get the basics, but want to stretch themselves further!" 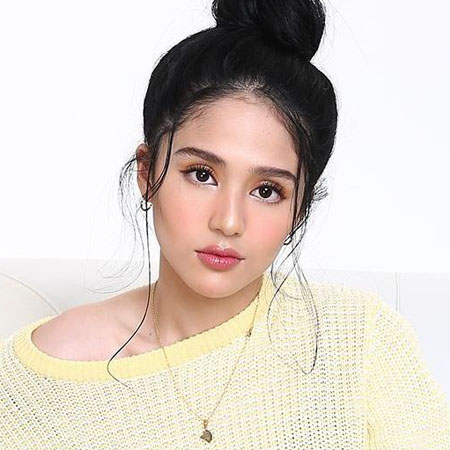 "The Vocal Gym teaches and showcases more than just the standard vocal tips and guidelines! From personal experience, it touches on not only the technical and scientific aspects of singing, but has also made me realize that the condition of mind and body are so important as a singer. One of my favorite things about the 7 Dimensions of Singing is that it adapts and is applicable to any singing style, regardless of your genre, and focuses on working with your current skill set, and enhancing it to produce the sound you want efficiently! Richard is an articulate instructor, able to break down all there is to it, while creating a comfortable and pressure-free learning environment to grow further as a singer." 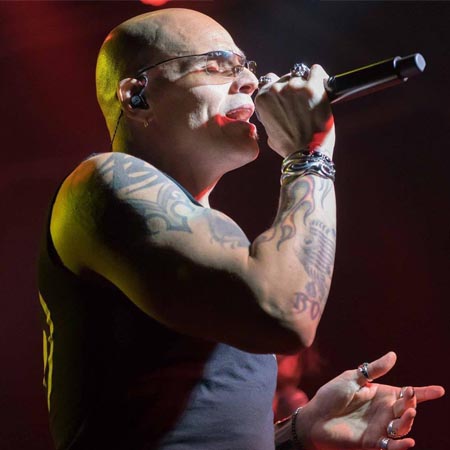 "In all my years of singing, presentations and radio, I’ve had the honor and pleasure of working with so many knowledgeable and well established vocal coaches that have taught me different strategies to maximize the potential of my voice, but it wasn’t until I came into contact with Throga that I truly understood the anatomy, functionality and execution of what our incredible vocal instrument can provide for us as speakers and singers! I would adamantly recommend this course to anyone who utilizes their voice as their principal means of income in a heartbeat! Thank you for this enlightening course... simply brilliant!" 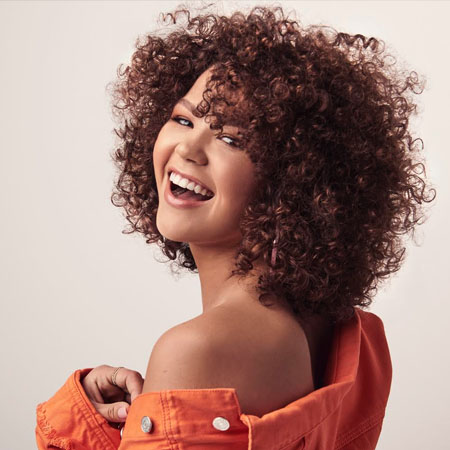 "As singers, sometimes we focus only on the way things sound. The Vocal Gym course teaches you WHY things sound the way they do, by teaching you what makes up your “voice”. I love how this program is not only very informative, but also interactive, to help grow your strengths and/or weaknesses as a singer!"

When does the course start and finish?
Your LIFETIME access to this course starts now and never ends! It is a completely self-paced online course - you decide when you start and how often you return to review and continue to progress.
What if I'm a complete beginner as a singer?
The beauty of singing is that ANYone can do it! Don't get caught up in wether or not you have enough 'natural' skill to do something you love. As long as you have a desire to sing and are willing to work at it, this course will help you reach your goals!
Can I take the course on my phone or tablet?
Absolutely! You are able to access the course, watch the training videos, and practice the MP3s across all the desktop and mobile devices you own.
What if I have questions about the technique or exercises in the course?
You can contact us at ANY time with questions regarding this course or singing in general! For additional video tips, guided exercises and interaction with other Throga users in addition to the Certified Throga Instructors, we recommend checking out the Beyond The Gym course as well.
How do I get my 1 month FREE membership to the Beyond The Gym course?
To gain access to the Beyond The Gym membership course and all 7 Dimension course exercises bundled with it, you will find a special 1-month FREE coupon code in the very first Vocal Gym course lecture. Use this code upon enrollment of the Beyond The Gym course to receive all of the related benefits and cancel anytime! 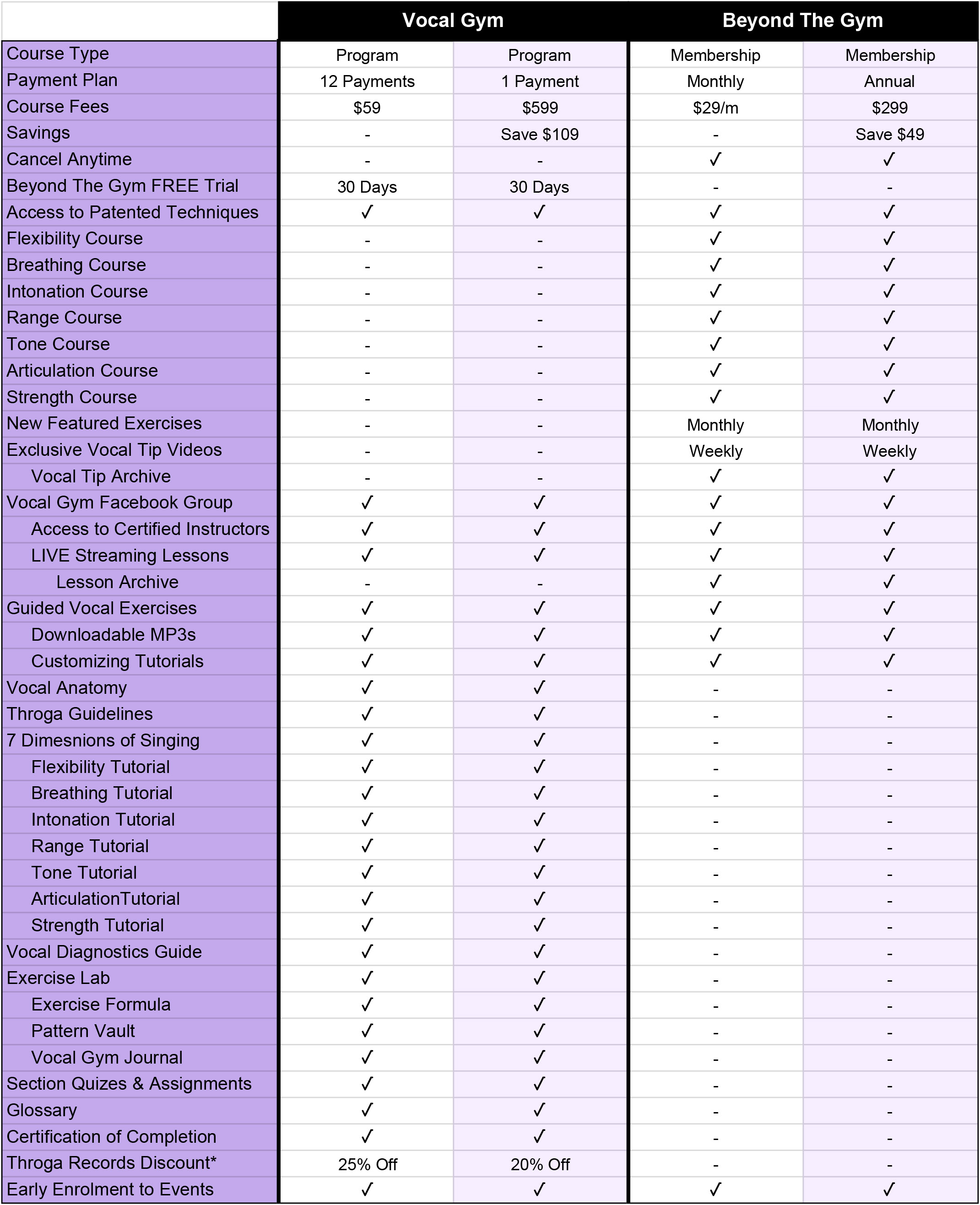